Hello!! Hope all you moms had a wonderful Mother’s Day.  There are a couple of changes here on my blog.  One is the name.  I started this blog almost 9 years ago, and the name I had for it fit, but it really no longer applies.  Plus…recently I entered a writing contest hosted by Dan Alatorre (I have reviewed his books in the past) and I received an Honorable Mention!!  (you can read it here). This contest had over 200 entries, and he liked so many of the stories that he added a 4th and 5th place and two honorable mentions.  To say I was excited is an understatement 😀  I also received a critique of the story from Dan, which I would have been happy with just that!!  So with that honor, I am embracing my inner writer, and thus the pseudonym, Carrie Ann Alexis.  I don’t know how much of my content will change here, but it’s the first step on this journey I have dreamed of for a long time.

WHAT I’M LOOKING FORWARD TO:

It’s that time of year again, where our town is covered in pink and has all kinds of events to raise money for Breast Cancer.  Saturday night is “Not Your Momma’s Bunko Night.”  My sister, and niece and soon to be niece-in-law are going to go as a team.  Should be fun, have never played before.  Sunday is the Battin’ for Boobies softball game.  Where the reigning champs, the Guns & Hoses (Police & Fire Dept) team will defend their title.  There are a couple of new businesses joining in on the fun this year. Fun weekend ahead!!

This is an actual video that I took a last Sunday.  Elijah and I drove through the park on our way home from the store.  It was very chilly that day.  We were amazed at the waves crashing on the walkway, but we were even more amazed at the two ships that were sitting just at the horizon (at the end of video).  We normally don’t see ships like this on the lake, especially not that close.  But it gets even better.  This past weekend, it was reported that the ship on the left had been abandoned.  It had been there for over a week, and when the coast guard went on board, they found a hand written note near some maps, and there was no crew!! Yep!!  A ghost ship!!  Kinda cool in a creepy sorta way, lol.  We haven’t heard any more about it, and it has since been moved.  Scooby and the gang must of solved the mystery 😉

One of my gifts for Mother’s Day, a pic with all my kids.  I also had Liv do a mini photo shoot, so I could update my profile pics. 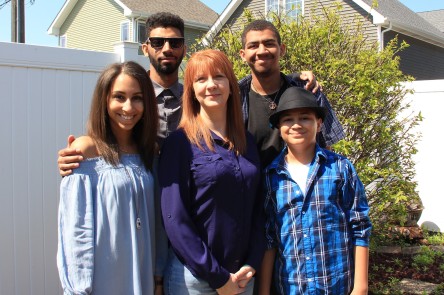