🙂 Tuesday is upon us once again!!

I’m back and ready to battle…let the #Blogbattle begin!!

#BlogBattle is a weekly short story challenge using a single word for inspiration.  Hosted by the talented Rachael Ritchey.  Feel free to join in, or click here to read the current week’s stories and vote for your favorites. 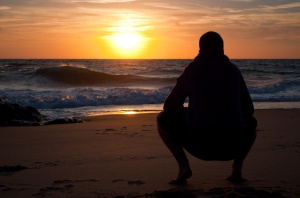 The Sun Will Rise

This is not going to be the message you expected to find in a bottle, but here goes.  Three days ago I buried my best friend…gone too soon, but never to be forgotten.  Please don’t EVER text and drive.  I have allowed myself a three-day pizza and beer bender, while Netflixing.  I write this note as a promise not only to myself, but to my best friend, that tomorrow I will begin to move forward on the endeavor we set out to accomplish together and not stop until it is successful.  I now sit and watch the sun set, while drinking my last Heineken.  The bottle will encapsulate this promise and carry it on the waves of the future.  Please acknowledge receipt of this message by contacting me at the email address below, (yeah I know, not usually how it works…whatever) by doing so you will hold me accountable and verify that I have kept my promise.

I know you were not expecting to be entering into an agreement with a guy in a beer laced cheese coma. As my thank you I will leave you with the words of wisdom that brought me out of my stupor, I hope it speaks to you.  This nugget from Victor Hugo…

Even the darkest night will end and the sun will rise.

Neve finds herself walking along the beach, the sound of the waves and the slight breeze dancing through her hair helps calm her racing thoughts.  Making this life decision has felt like one of her darkest nights.  All the research, knowledge and support from genetic specialists doesn’t make it any easier.  With her family history of breast cancer, having this preventive surgery will save her life, though coming to this conclusion has been the most difficult thing to do.

She never imagined at the age of 32 she would be facing all this alone.  Well not completely alone, her best friend Jen will be by her side every step of the way.  Thinking of Jen’s support brings a smile to her face and with that she sends up a silent prayer of thanks and looks to the heavens seeking some comfort for her anxious soul.

She walks a few more feet and almost trips on a bottle stuck in the sand, she picks it up and brushes it off.  There is a piece of paper in it.  She smiles to herself at the absurdity of finding a message in a bottle.  But she reads it nonetheless.  She folds the paper and slips it into her back pocket, with a tear streaming down her cheek, she hugs the bottle to herself as she watches the sun set.  As if doing so will connect her somehow through the space-time continuum with the sender and their shared heartache.

When she arrives home she places the bottle on the kitchen windowsill and turns on her laptop, using the email address that doesn’t give away any of her personal information but a nod to her favorite Avenger, Black Widow.  She sends the following message:

Message received.  I am so sorry to hear about your friend.  From the date on the note, it looks like it’s been almost a year and a half.  Have you kept your promise?  Your words of wisdom did speak to me, more than you’ll ever know.

By the way…the bottle is actually worth 10 cents in Michigan, thank you for that…I’ll deposit it into my retirement fund. 🙂

Neve closes her laptop, not giving the message another thought.

Mark walks into his dark house after another late night at work.  He feels like he hasn’t stopped since he hit the ground running a year and a half ago.  He knows he wouldn’t be where he is today, had he not given 150% of himself to this endeavor.  Even though he is tired to the bone, it was the best way to honor his friend’s memory.

He turns on the TV while checking his personal emails.  He goes down the list checking off the ones to delete, he pauses, his eyes lock on a particular message.  Not because the sender is Black Widow, but because of the subject line he clicks on it to open it, while fuzzy memories like an old movie invade his mind.  Once he reads the message, it all comes back to him and he sends back a reply.

His simple reply turns into daily conversations with this amazing stranger, who has become more than a friend.  They have shared every detail of their lives through emails, texts, phone conversations and video chats, it is only the four-hour physical distance that keeps them from each other.  Neve was careful in the beginning not to identify who she actually was, until she knew she could trust him.  Even after she told him where she lived and what her name was, he continued to call her Natasha, because when he did, it felt like that smile was created just for him.  It’s during the video chats that he can see the anxiety and fear in her eyes when she talks about her upcoming surgery.  But she masks it with an expression of fearlessness that can only be matched by her virtual namesake, all the while assuring him that having Jen with her will be enough.  He is not convinced.

On the morning of the surgery, she is up and ready to go before it is light out.  Her phone rings, she assumes it is Jen, but it’s Mark.  The sound of his voice calms her nerves a little, but at the same time it makes her heart beat a little faster at the realization of how much he cares.  It is a brief conversation because it is time for her to go.

Neve locks her front door and turns to head towards the car, before she can open the door, from behind her she hears, “Hello Natasha.”

“Mark.” She says on a breath, instinctively knowing it’s him before she even turns around.  In a matter of seconds she is wrapped up in his arms.  As she holds on to him, in the distance the sun rises, just like he said it would.