It started Tuesday afternoon at about 1 p.m.  The snow did not stop falling and blowing (30 – 40 mph) until Noon on Wednesday (today), leaving 19 inches of snow with 3 – 5 foot drifts.  This is the 3rd largest blizzard in our area.

My mom always talks about the blizzard of ’67.  It was my sister’s 4th birthday, I wasn’t born yet.  But she spent the day cooking and cleaning and preparing for a birthday party, she was unaware of the snow falling until my dad walked in from work late that evening, covered in snow.  The whole issue with that blizzard is that no one knew it was coming, so it paralyzed many areas.  With this storm we knew it was coming, the weatherman had been talking about it since last week and gave everyone plenty of time to prepare.  Those who weren’t prepared probably just chose not to believe it was coming.  With history repeating itself, Elijah’s birthday is today, with the blizzard coming to an end in the afternoon, I made sure I was fully prepared to have a birthday celebration at home.  Monday we went to the store to stock up on food and stuff.  Tuesday, I baked the cakes and cooked his favorite dinner (Italian Beef sandwiches), just in case we lost power.  With the way the storm was coming in, the worst of it hit us while we slept.  Not taking any chances I also made a pot of coffee before I went to bed.  If we lost power I could still heat things up on the stove.  I also cranked up our heat so it would be nice and warm in the event the power went out in the middle of the night.  Thankfully we did not experience any major difficulties.

This morning we all went out to shovel and got some welcomed help from a neighbor with a snow blower.  Cook, Joshua and Olivia went to her friend’s house the next block over to help her shovel out, and helped another lady whose husband was out-of-town.  They had fun helping.  After that Elijah had his cake and opened his presents and we’ve just been hangin’ out inside enjoying this quiet lazy day.  As Elijah is known for saying, he summed up the day as, “the best day EVER!!”

This is what our backyard looked like before we went to bed, and then what it looked like when we woke up in the morning.

Being so close to Chicago, I have been watching the news and seeing what they are dealing with in the city.  Last night they closed down the major street that runs right along the lake called Lake Shore Drive (LSD).  This was after 3 accidents occurred, but not in time to prevent 900 drivers from being stranded.  Emergency crews were able to get the people to safety leaving their cars stranded.  I have never seen anything like it!!  Lake Shore Drive looked like a parking lot with cars buried and stuck between snow drifts.  Today they have crews out there to dig the cars out and tow them away, there’s about 200 cars left to remove.  I am so thankful that I didn’t have to be anywhere or try to get home like so many people experienced.

Even though the snow has stopped and some people are slowly getting dug out, I don’t know that the worst is over.  Tonight and tomorrow we will be experiencing dangerous wind chills of 25 to 35 degrees below zero.  One thing we can say for sure is, the snow isn’t going anywhere, anytime soon.  But hey…I like snow…right?!?!  Anniehow! 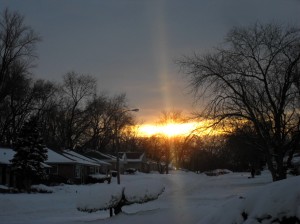